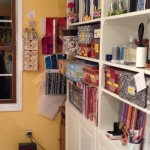 Some of the thread is kept inside boxes that sit in a bookcase. Some of the boxes  hold big spools of thread which are used mostly in my longarm machine. I might also use them to sew a binding or do some applique either by hand or machine. Here are some examples: 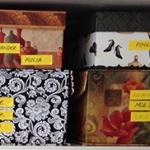 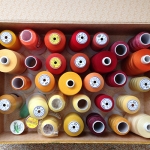 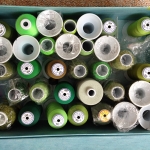 There are bobbins that go along with each spool. Here is a few ways I keep these bobbins: 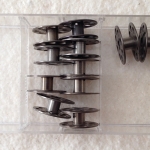 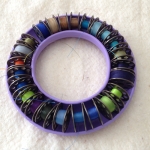 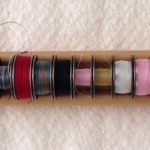 Other colors and almost empty bobbins 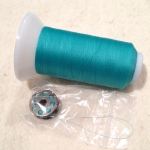 I place the bobbin in a small bag. 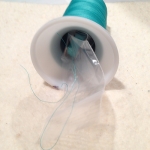 Then place the bag inside the cone. 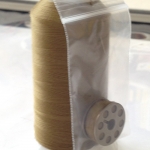 Or use a pin to hold the bag onto the spool.

Some of the boxes have too many spools and some spools will have to go upside down. To be able to know what color it is I use a sharpie marker and write on the bottom of the spool. 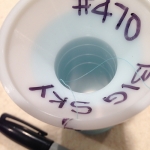 Label spools with a sharpie

I also use a sharpie to mark the place that holds the end of the thread when the spool is not being used. 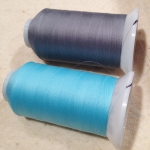 Black marks indicating where to lock the thread tail.

Other threads are stored in the sewing machine room in a cabinet with doors. 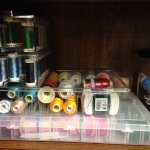 Thread in containers in a cabinet with doors 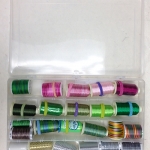 I removed some dividers to store small cones 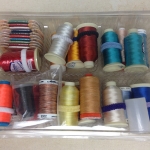 These other ones are actually designed to store small spools of thread. They also have lids and are designed to be stacked. I use them for embroidery thread that is used for quilting or machine applique. 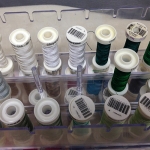 These are for small spools 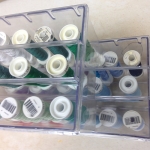 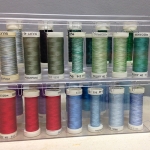 And then there is that other drawer, the one that holds the thread for the patchwork. 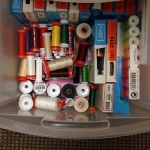 Aurifil and Mettler, for patchwork

I use different color of bobbin holders for my different sewing machine.

Different colors of bobbing holders for different kind of bobbins

I also have a bobbin holder with bobbins filled with thread for hand applique. You can buy these already filled up but I decided to buy inexpensive bobbins that can be wound in one of my machines and filled the bobbins with the thread that I already had. This is easier than transporting several spools of thread. 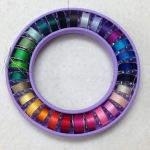